US 70 was originally TN-1 and was the original Bristol – Memphis highway. It became part of a federal highway project and renamed US 70 and dubbed “Broadway of America”. This was the first paved road from the east coast to the west coast.

Tennessee recognizes US 70 as the unofficial bike route across Tennessee, as a result, Sparta gets a disproportionate of coast to coast 2-wheeler traffic. A good portion of US 70 is adorned with very wide shoulders to accommodate bicycles and agricultural vehicles. When the federal highway project straightened US 70, a second highway of the same name emerged. The old Hwy is now US 70 S.  The old route (70 S)  through White County has a higher percentage of wide shoulders than the newer and has thus become a preferred place to peddle.

Some of the most spectacular scenery in the Cumberlands can be found along Highway 84 north to Monterey. A beautiful loop takes you up 84 to Mill Creek Road in Putnam County. And is if life wasn’t confusing enough, Mill Creek road intersects yet another US 70 – – 70N. Follow 70N west to Cherry Creek Road, which brings you back to Highway 84 in White County just a few miles from Sparta. This loop is a primary ride in an annual bicycle race that has grown to about 300 participants. Beware that much of 84 is hilly, narrow and so little shoulder that the state placed the rumble strips in the center line. Thank goodness the route sees little vehicular traffic. It should be traveled with caution, and please respect that the cars need space too.

If you would like to ride on an Interstate, you will love Hwy. 111. Portions of this North/South route are built to the same standards as a super-highway and a portion of it has 70 mph traffic. But, just like interstates, it has wide shoulders and bicycles are often seen traveling along this route which minimizes elevation change. 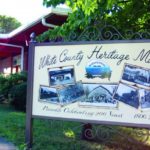 Three of the four museums in White County are open on Saturday, all contain fascinating anecdotes of our Cumberland Heritage. Ample parking can be found at 10 East Rhea Street in front of Town Hill Bicycle Shop. Head West on Rhea Street two blocks and turn left on Church Street. Then take an almost immediate turn right on Bockman Way (US 70). Cross the Calfkiller River and turn right onto North Carter Street where you will pick up a paved trail on the right that takes you along the Calfkiller River and under US 70. Follow the paved trail up to South Carter Street and turn left. At the end of South Carter there is a parking area and another paved trail. This trail takes 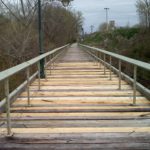 you across a century-old, converted rail bridge to South Young Street. Turn left on Young, and left again on South Main. On the left, you will see a tiny stone building with a National Register plaque over the door. That was the original Sparta Electric station for electricity generated by the Calfkiller River, long before there was a Tennessee Valley Authority.  Your first stop is just around the corner at 144 South Main Street, the White County Heritage Museum. 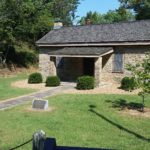 When you exit the museum, you can continue through the parking lot to South Young Street, and turn left. Take the first road to the right (Sims Street) which will become Greenlawn Drive before it dead-ends into Gaines Street. Turn right onto Gaines and right again as the road forks. Gaines becomes Country Club Road which was part of the original stage road that eventually became the first paved road between the east and west coast of the United States. Your next stop is at the Rock House Historic Shrine, about four miles away at  3663 Country Club Road.

When you leave the Rock House, turn right on Country Club and Cross US 70, this will loop you out of traffic in the rock cut and bring you back out on 70 a half-mile east. Cross 70 again and take the first right on Old Bon Air Road. Be prepared for a quarter-mile steep climb.  As you climb the mountain and approach the escarpment (bluffs) look 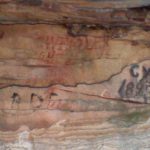 closely and you will find dates from the 1800’s scrawled along the cliffs. The wealthy took refuge in the Rock House, the poor sought shelter under these rocks as they traveled the Old Stage Road. One mile off 70 you will spot a watering hole coming out of the mountain. Many locals fill their drinking-water jugs from this Artesian Well. At one time an inn was built above the bluffs and people came from all over the south east to drink and bathe in the water for “medicinal purposes.” The Old Bon Air Road is 4.3 miles long and connects again with US 70 where there are ample bicycle lanes on both sides of the highway. Turn right and follow the route to your next stop, 9479 Crossville Highway (US 70), Sparta TN; the last remaining railroad section house on the Cumberland Plateau, now used for a miner’s museum. 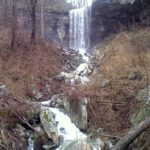 When you leave the miner’s museum, follow US 70, west back into Sparta. There is a wide 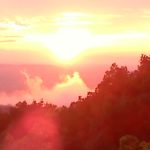 bicycle lane the length of the ride. Though not historic, you will want to pull off behind Sunset Rock and enjoy the view and stop for a moment 3/4 miles west of Sunset Rock to view Wildcat Falls.